The NSW Medal is played over 36 holes of stroke play with the leading 32 available players progressing to the elimination rounds for the NSW Amateur Championship.

The NSW Amateur Championship dates back to 1898 and is one of Australia’s oldest golf tournaments. It is for male amateur golfers with a current handicap of less than 5.4.

IN 2020, The NSW Medal will be conducted on the 20th & 21st of January with one round each at St. Michael’s and the Coast Golf Clubs.

The leading 32 available players at the conclusion of the NSW Medal will progress to the knock-out phase of the NSW Amateur Championship which will be held at St. Michael’s Golf Club. Matches in the NSW Amateur will be conducted over 18 holes, with the final to be denied over 36 holes.

Also incorporated into the 36 hole qualifying rounds is the NSW Champion of Club Champions Trophy.

The honour roll of past champions includes players who went on to take out State and National Open Championships, and includes two Major Champions, Michael Campbell (1992), and Jim Ferrier (1931,34, 37,&38)

Entries for the 2020 NSW Amateur are open. click on the button below 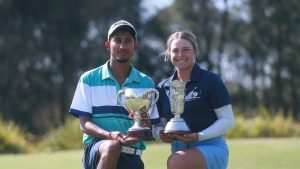 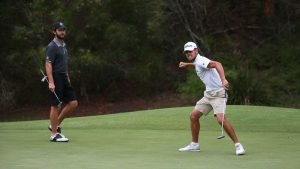 Brilliant Barbieri through to #NSWAm final