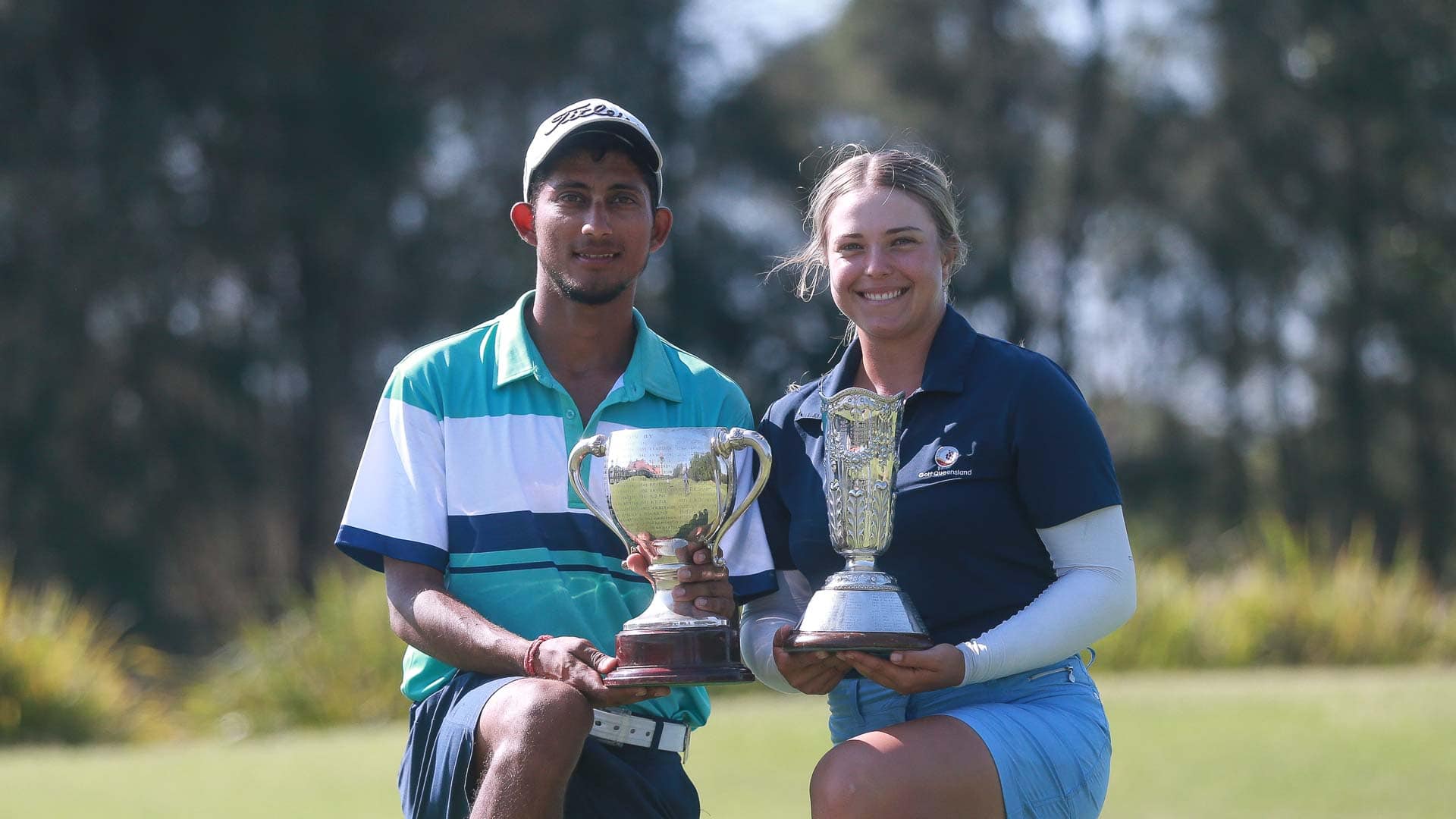 Queenslander Lisa Edgar and India’s Kartik Sharma have claimed the Women’s and Men’s NSW Amateur Championship in a stunning afternoon of golf at Terrey Hills Golf and Country Club.

Both players entered the afternoon 18 holes with comfortable leads. However, their opponents, Grace Kim and Nathan Barbieri were ready to pounce.

It didn’t quite go to script though.

Barbieri, looking to take advantage of his length on the first hole, overshot the green then took a couple of strokes to find the putting surface. At five down, suddenly, he had a lot more work to do.

Kartik maintained the tempo, and a hole was swapped back and forth until Barbieri made his move on the seventh. A makeable birdie try slipped by, but the intent was clear.

When Kartik made a mess of the eighth and then Barbieri was able to double down on the ninth with another win, the match had some life in it.

Barbieri kept the pressure on and grabbed a couple more holes at 14 and 15 to get it back to just one up. Both had makeable birdie putts on the 16th that slipped by, before the drama of the 17th unfolded.

After Kartik played a solid five iron second shot to the middle of the green 30 feet shot, Barbieri launched a missile from the right rough. Sadly, however, it flew the green, almost ending out of bounds over near the 18th tee.

Just inbounds, Barbs’ hit what looked to be a miracle pitch, only for it to check on the downslope and leave himself 9 feet short.

Kartik putted up to a couple of feet, then, in the cruellest twist, Barbieri’s putt that looked home for all money, did a 180-degree turn on the lip to stay out. With the match effectively over, Kartik rolled his putt in for the win, and his first ever international title.

The Indian was a relieved man after the match.

“It’s funny, it’s what I thought on the 17th, that you have to have it in here,” he said pointing to his chest.” I committed to what I was doing.

“Starting the year, I had it as one of my goals to win an event internationally.

“People were asking me if it was achievable and I knew it was because I know what I am capable of.

“I thought I could win and it feels great to have won this event,” he smiled.

The win, the biggest of his career, also comes with a start in the 2019 NSW Open, which Sharma was pleasantly surprised to hear.

Burleigh Heads teenager Lisa Edgar was shaking after her win, by far the biggest of her young career.

It was a completely unexpected performance for the nineteen-year-old, who by her own admission, said if she had missed the cut this week she was heading home for a bit of time away from the game.

“I played really well this morning.

“All credit to Grace she fought back this afternoon. We had a really good match.”

“I don’t know what to say or how to react, it’s a new experience for me,” she smiled.

Edgar was in control all day, at one stage getting out to a six-hole lead on the front nine, but Kim being the competitor she is, came back hard.

Momentum swung on the back nine, and the experienced NSW State team rep clawed it back to two down.

The 17th was as far as it was going to go, however, and when Kim lipped out for par, all Edgar had to do was roll in her putt, and the title was hers.

Edgar is expecting plenty of congratulatory messages when she opened up her phone after the win.

“Mum and dad were messaging me up to about a minute before I hit off. I expect there will be a lot more there now,” she smiled.