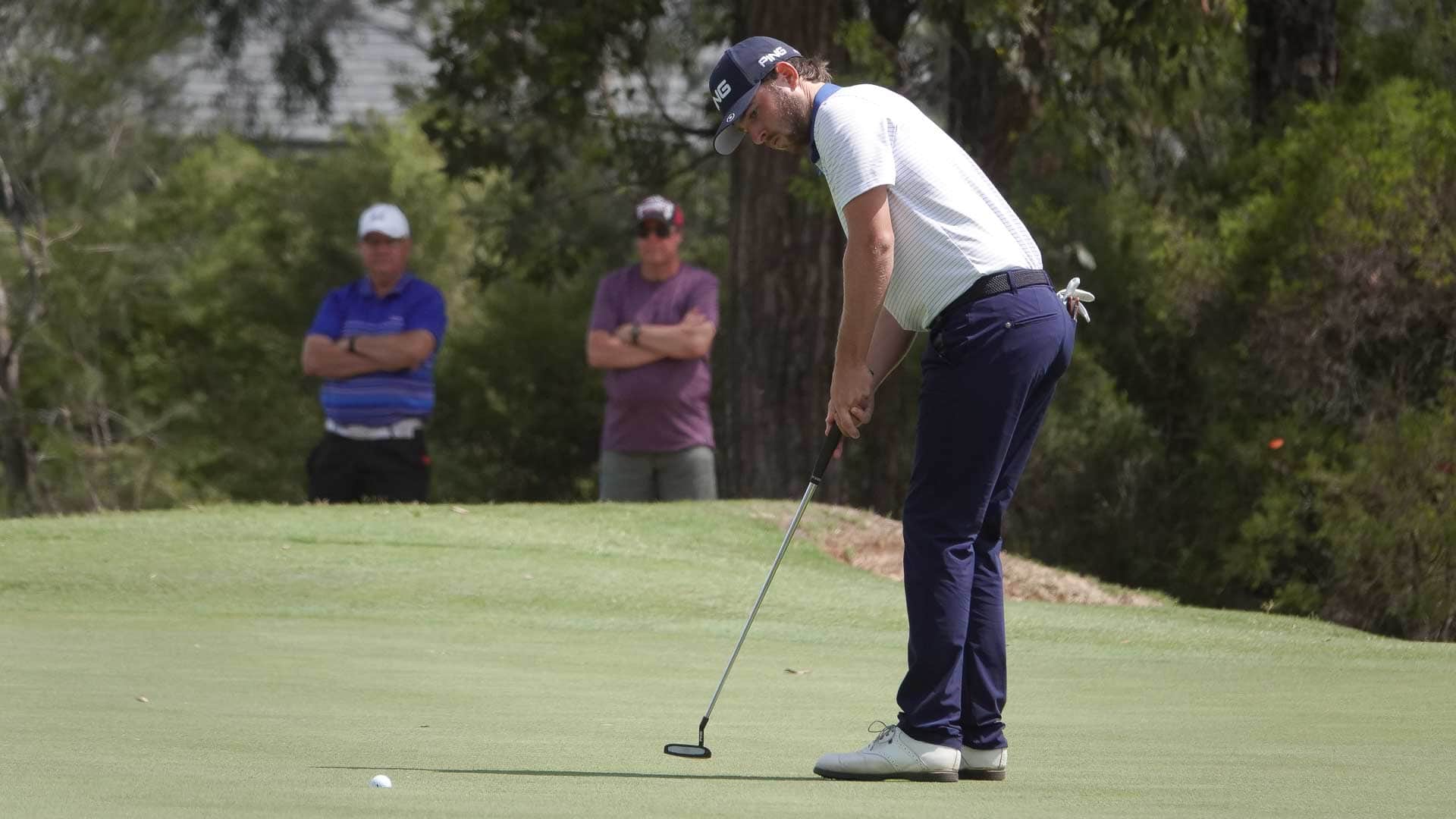 New South Welshman Harrison Endycott has fired into the lead at AVJennings NSW Open after a perfect round of golf.

Reeling off eight birdies for the day, Endycott shot 8-under 64 and is bogey-free for his first 36 holes at Twin Creeks Golf and Country Club.

At 12-under the card after two rounds, Endycott holds a one-shot lead heading into the weekend.

“It was definitely nice this morning with great scoring conditions. My game has been slowly getting better over the last six months. I really did feel like a low round wasn’t far away,” said Endycott.

“I think playing yesterday afternoon in those tricky conditions definitely helped build my confidence going into the second round this morning.”

With his state open marking 12 months since he joined the professional ranks, Endycott tees it up this week a more experienced player.

The 22-year-old has spent 2018 competing on the PGA TOUR – Latinoamerica with solid results. In 11 starts he has made 10 cuts and recorded four top-10 finishes including a runner-up result in September.

“I had a full season over there. It’s definitely an interesting Tour, its challenging off the golf course and it definitely toughens you up as a player,” added Endycott.

“I learned how to manage myself away from the golf course in preparation. Learning how to get away from the money, this time last year I was always looking at how much I could make whereas the Latin Tour taught me how to get into contention more. I think that has been a huge boost for me and coming into this week it felt a lot easier.

“There were a lot of positives to draw from this year. I ran second once and I had three top-5’s. I am just trying to build my confidence and build some momentum for the summer here.”

Returning home was bittersweet for Endycott who missed out on progressing to the final stage of Web.com Tour School but will instead play in the ISPS HANDA PGA Tour of Australasia and European Tour co-sanctioned Australian PGA Championship at the end of the month.

“I was very close to getting through second stage of the Web.com Tour to the final stage; that was a little heartbreaking on the flight home for the Aussie summer.

“When one door closes another one opens. I really had to analyse all my positives; I get an extra event, I get to play for something maybe in Europe.

“You just never know in this game how quickly things can change. There are a bunch of players who have proven that.”

Overnight co-leader Cameron John also took advantage of the scoring conditions this morning, backing up his first round performance with a 5-under 67.

Now one shot off the lead at 11-under the card, John hopes to continue scoring birdies on the weekend as he chases his first pro win.

“It was a little bit easier today, there was no wind for the first seven or eight holes but I felt like I got off to a slow start, I just didn’t make any putts. I knew there are enough opportunities out there and if you stay patient some will go in,” said John.

“I think anywhere around 22-under will get the job done this week. So I will aim for 28 or 30 and hopefully win by a few,” he said with a laugh.

Playing in his rookie season, John is fast learning what it takes to be in contention on the ISPS HANDA PGA Tour of Australasia and has looked to one of the Tour’s most experienced players as a role model.

“What I have learnt most; it doesn’t matter how you go about it, so long as you have a game plan,” added John.

“I have played a couple of times with Matt Millar now and that guy is really impressive. It was great playing with him in WA, because it helps show that if you plot you way around and hit your spots, you can tear up a golf course pretty easy.

“I used to get really caught up in what score I was, but now I think about the actual target and the shot I have to hit and think less about what score I need to make.”

Sitting one shot further back on 10-under the card are South Australian Brad Moules who fired 6-under 66 today and Queenslander Blake Proverbs who had a second round of 67.
Rounding out the top-5 on the leaderboard are; Jake McLeod, Matt Millar and Ashley Hall who all fired 68 in the second round to be 9-under the card.

The second round cut was made at 1-under the card with 61 professionals and 12 amateurs making the weekend rounds.

The third round of the AVJennings NSW Open will tee off at 6.45am with the final group of Endycott, John and Moules on course at 11am