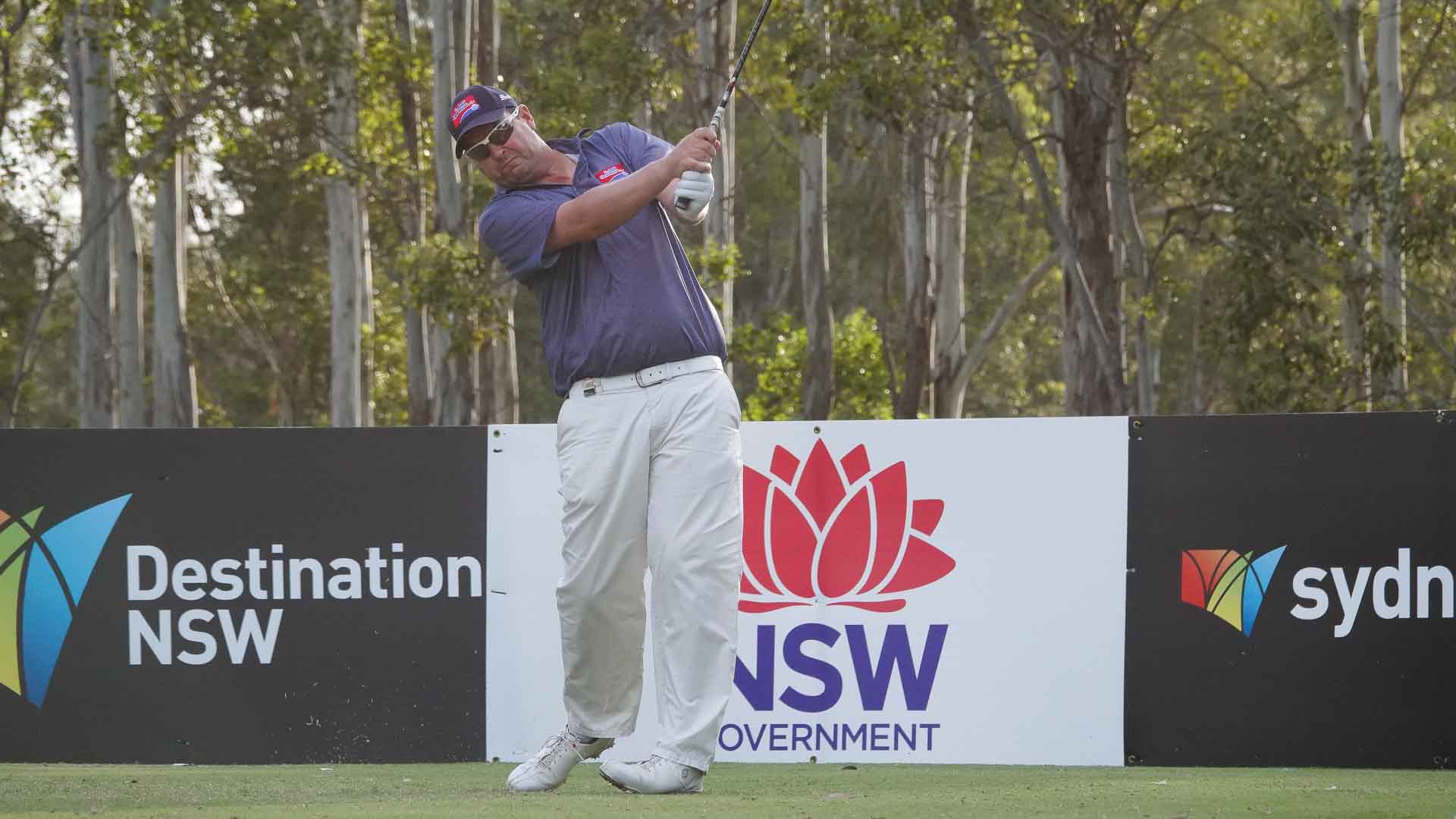 You don’t often get to play with house money in professional golf but that’s where Ash Hall finds himself through two rounds of the AVJennings NSW Open at Twin Creeks.

The 35-year-old Victorian was among the last players on course in the second round and despite a three-putt bogey at the 17th hole signed for a 4-under 68 that has him 9-under and three off the lead with 36 holes to play.

For a man who got the first full time job of his adult life in April, it’s a comfortable position to be.

“I’ve got nothing to lose,” says Hall, whose days are now spent working the shop floor of the Golf Clearance Outlet’s head office store in Melbourne.

“And you never know what could happen. I’m the sort of player that sometimes gets on a little roll so we’ll just keep doing what we’ve been doing over the weekend and see what happens.”

Hall is a three time winner on the PGA Tour of Australasia and played three years on the secondary Web.com Tour in the US.

But despite several close calls, including a play-off loss to Jordan Spieth at the 2016 Australian Open, he hasn’t quite managed to get to the next level.

The financial realities of life on the tour has meant that, with a young family at home, Hall has all but conceded his playing career is done hence the new role at Golf Clearance Outlet.

But a professional golfer is all he’s ever wanted to be and while he grudgingly accepts the reality of his current circumstances he would also never say never.

“Realistically I’m pretty close to being finished,” he said. “I’ve definitely given up on overseas golf which kind of sucks.

“A golfer is what I’ve always wanted to be and being a touring golfer is the best job in the world.

“The family and financial situation just means that’s the way it is. But you never know in this game either.

“I’m playing next week at ten Australian Open and also the PGA up on the Gold Coast and the winner of that gets a European Tour card….”

Having only teed up competitively in the recent pro-am circuit in Melbourne Hall said he was a little surprised by his play in the opening two rounds though, ironically, credited having a job for some of his form.

“We just got some new Trackman simulators at the shop and I’ve been going in early every day and hitting balls for about an hour,” he said.

“For the first few weeks I was just hitting balls and watching numbers but the last couple of weeks I’ve put the simulator in ‘combine mode’ and that means you’re hitting lots of different shots.

“I think that’s sharpened me up a bit and maybe I’ve got a little different perspective because I know I’ve got work to go to now after the summer events so it’s all combined to free me up too.”