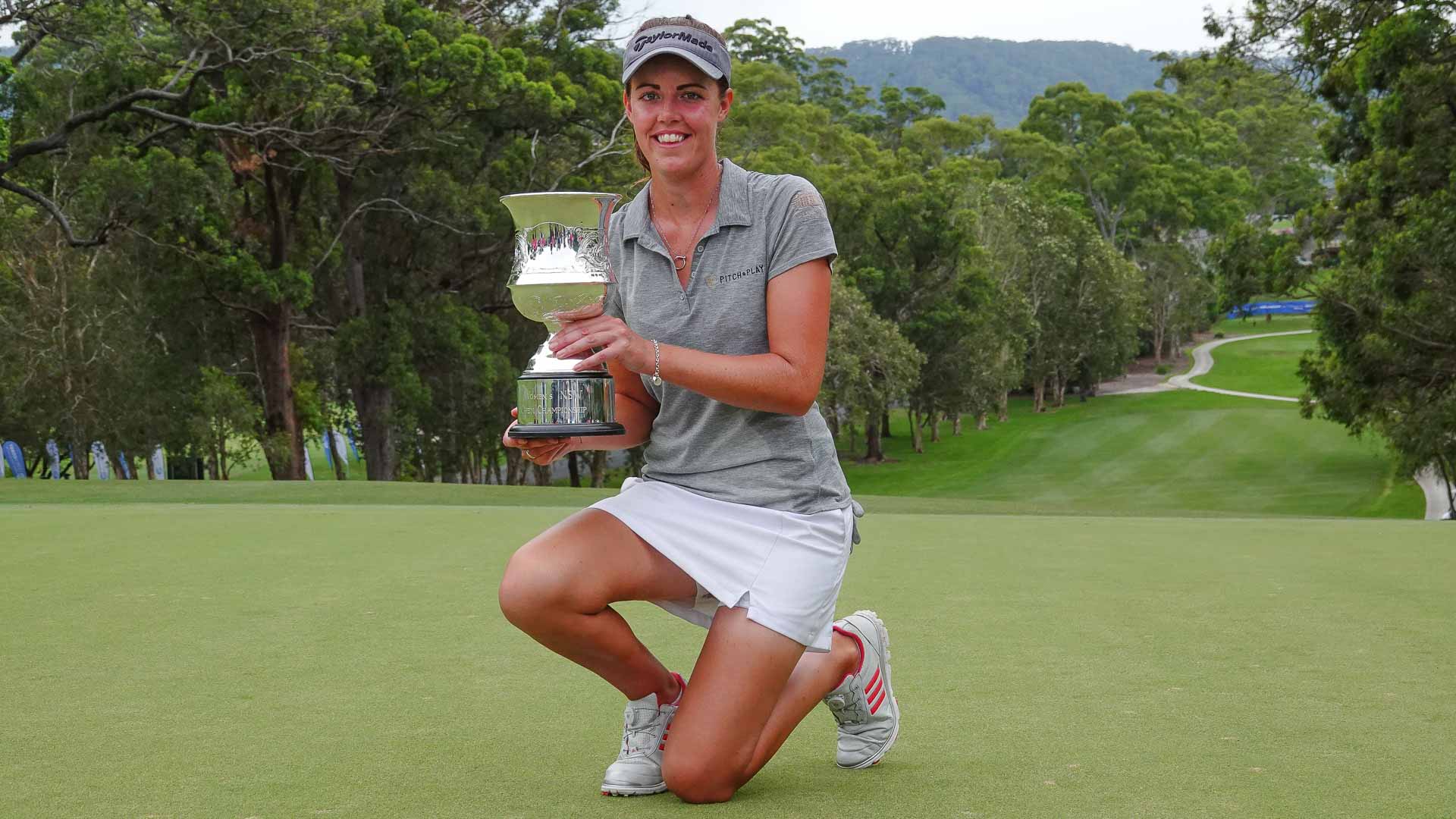 On a day when several challengers made good starts, the 23 year old held her nerve and didn’t look like relinquishing the lead at any stage, going on to win by two shots from a trio of golfers, Silvia Baron of Spain, Marta Engzleuis of Norway and Casey Danielson of the United States.

Despite a two-shot overnight lead, and with a reachable par four opening hole, it was clear that any move on the leader was going to come fast.

Sarah Kemp from Forster Tuncurry made one of the earliest moves and had seven under par after six holes. Sadly, a bogey on the 7th hole made her task that little bit more difficult.

So too did Wales’ Lydia Hall. Three birdies in the first four holes saw her rocket up the leaderboard and well into contention. A double on the 5th saw her drop back into the pack.

Playing alongside MacLaren in the final group, many expected the experience of Rebecca Artis to come to the fore despite the five shot distance between the two. It took Artis a while to get going, but with birdies on the 8th and 9th, the NSW player was set to make a move on the back nine. Sadly, a drowned tee shot on the 10th led to a double bogey six and a tumble down the leaderboard.

All the while MacLaren remained calm. As quickly as a challenge came, she answered, and she soon found herself four shots in from the opening nine.

Despite battling the nerves of a player who had never won on tour, MacLaren remained calm and posted three birdies and a lone bogey on the front nine to make the turn at 12 under.

But MacLaren hadn’t seen off all of her challengers. Several groups in front of the leaders, it was Casey Danielson who made the biggest charge as the leaders turned for home. The young American got it to eight under and within a couple of shots off the lead. Sadly, a missed birdie chance from under four feet on the 16th and then another on the 17th meant the LET rookie would finish in a tie for runner-up.

It was apparent to those watching it was going to take something special to catch the tall English woman. Artis made a late charge with birdies on 16 and 17 and came to the last needing to make up two shots. However, she flew the green with her approach and then three-putted after chipping the ball well past the hole.

The Norwegian Engzeluis, also in the final group alongside MacLaren, couldn’t get going either and could only manage an even-par round for the day.

In the end, all that was left for MacLaren to do was two-putt the final hole for her first win ever.

MacLaren was elated with her Championship win when asked a bout the feeling post round.

“This is the best I’ve played for a long, long time.

“All parts of my game were good.

‘To go out there today and to still feel in control of my ball striking and all of that, it gave me a little bit of margin for error towards the end,” she said.

When asked about how it felt to win her first Ladies European Tour (LET) event, MacLaren was over the moon. “It feels incredible.

“I didn’t think those words would be coming out of my mouth so soon.

“I played well in the few events that I played last year, but you’ve got to be patient.

“It can take some players years before they get over the line. To do it now gives me a lot of confidence,” MacLaren said.

MacLaren joins a selected group of golfers to win the NSW Open that includes Dame Laura Davies and former world number one Lydia Ko. When told of the company she new keeps, MacLaren was shocked.

“Oh wow! I had no idea. that’s incredible,”she beamed.

NSW GC ‘s Hannah Park took out  the low amateur title with a final total score of three under par.