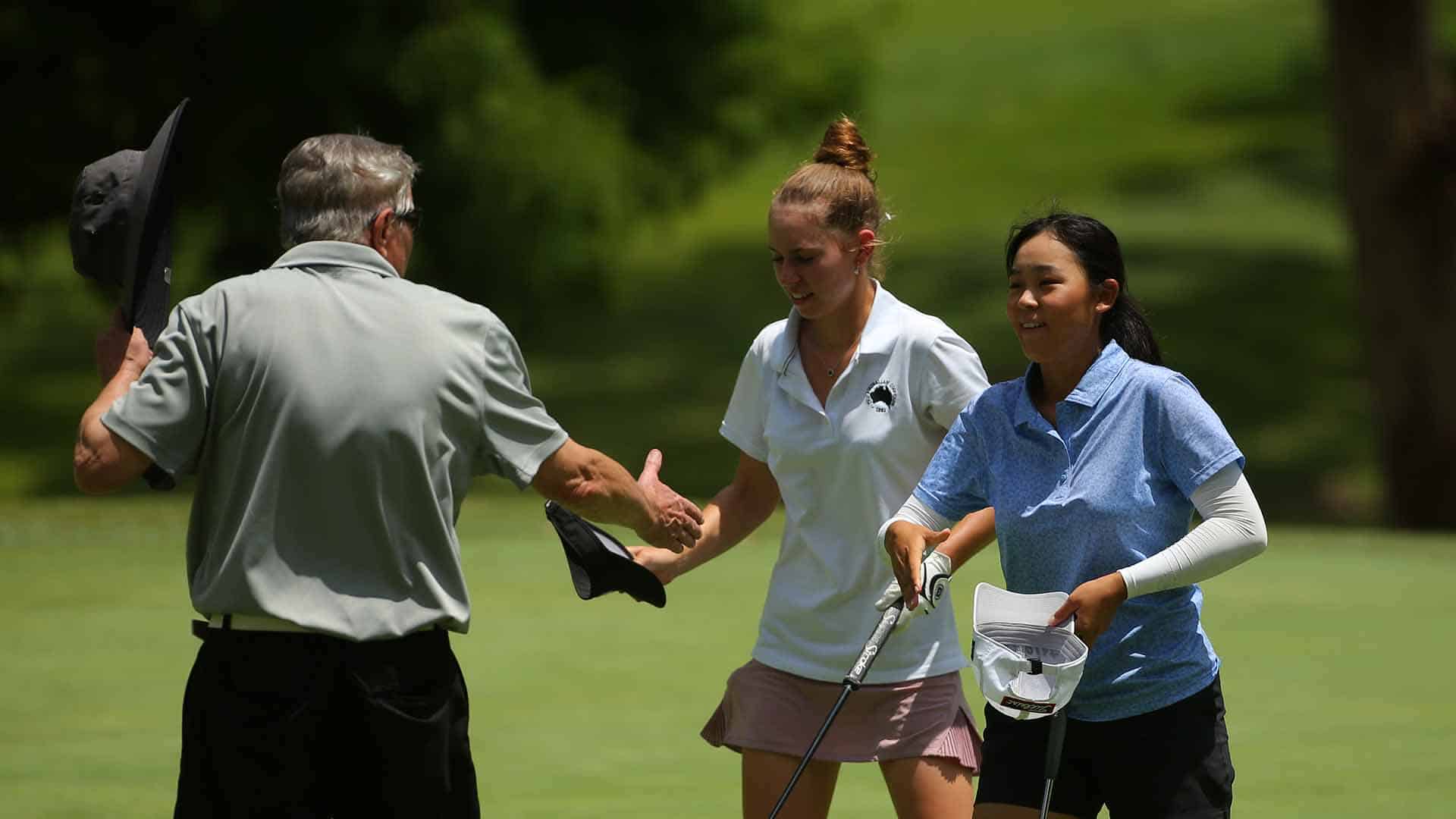 The top seed fell in the women, the youngest competitor in men’s claimed back-to-back scalps, and a kid who was once told he was ‘too small to caddy’ was all the talk on the opening day of matchplay competition at the NSW Amateur.

On a day where the competitors had to battle the humidity as much as their opponents, Strokeplay medallist and top seed Haruhi Nakatani fell 3 & 2 to some inspired golf from a plucky Charlotte Perkins of The Australian Golf Club.

A quality battle from the outset, Perkins shone, the teenager winning the 2nd, 6th and 11th to establish a three-hole lead. Nakatani wasn’t done, however, and staged a late comeback with wins on the 11th and 13th to peg the lead back to just one with four holes to play.

Sadly for the Queenslander, that was the closest she was going to get, with Perkins rolling in back-to-back birdies to finish the contest on the 16th green.

“I knew that I had to put my best foot forward against Harani, who is a great player. It was really nice.”

“I hit a lot of greens today. I did have one double, but that was my only bogey for the day.”

“I holed about a 45-footer on 15, and then I holed a putt from off the green on 16 for birdie, so back-to-back birdies to get back to three up felt nice, and that was pretty much the end of the match,” Perkins grinned.

There were few other surprises in the women’s, with last year’s runner-up Shyla Singh dominating Annika Rathbone 7 & 6. Finland’s representatives, Henni Mustonen and Kattri Bakker, advanced, and so did last week’s Avondale Amateur Champion Claire Shin, but not before a bit of a battle with Avondale’s Rachel Lee.

Sadly, 2020 runner-up Belinda Ji could not make it past the opening round, going down to her Concord clubmate Michelle Bang 3 & 2.

Tomorrow’s Women’s Quarterfinals will get underway at 7.00 am.

MEN: GIANT KILLER GROWING IN CONFIDENCE WHILE KADE STILL DREAMS ABOUT THE KINGDOM

With the men’s matchplay whittled from 32 down to just eight, several fancies saw themselves looking for the exit today at Pennant Hills sooner than they expected.

Two-time Aussie Junior Champion Jeffrey Guan cruised through his morning match against Manato Nakamani 3 & 2. However, The Australian Golf Club gun had no answers in his afternoon contest, going down to Abel Eduard 2 & 1.

Lincoln Morgan, runner up in the Medal, got through his morning match 7 & 5 but then ran into defending champion Harrison Crowe, who was too strong for the Queenslander in the afternoon contest, 2 & 1.

The talk, however, was about the exploits of 14-year-old Ian Kim and the ‘slightly older’ 16-year-old Kade Webber from Stonecutters Ridge.

Kim, from Ryde-Parramatta, impressed with his resolve throughout both contests, first claiming The Australian Harrison Glenday in the morning, followed by a nail-biting win against the well-regarded Harry Petersen.

“I was happy with how I played n my first match against Harrison Glenday, but I struggled a bit in the second round.

“I was trying to hold on, and I was four up early, then I just got really tired.

“I wasn’t really focusing or giving it my best, but I held on till the end,” the teenager said.

With another long day in store should he progress into tomorrow’s afternoon matches, Kim said he would have to control his pace of play more.

“I know I will need to approach it a bit slower tomorrow. My driver was the strong part of my game this afternoon, and I know if I hit fairways and my short putts go in I will be OK.”

For Stonecutters Ridge representative Kade Webber, simply making the Matchplay has been as much of a surprise as his impressive opening-day effort in advancing to the quarterfinals.

Webber, who was once famously told he was ‘ too small to caddy’ in the 2015 NSW Open and who then went on to become a bit of a media star for ignoring the advice and going and doing it, took out the well credentialled Blade Gadd in 4 & 3 in morning play.

He doubled down with a hard-fought win in extra holes over St. Michael’s Jeff Pullen to complete one of his best days on course in months.

“I played good this morning but struggled this afternoon,” a relieved Webber grinned. “I haven’t shot under par in about 25 rounds. I’ve been hitting the ball everywhere and just getting it up-and-down, so yes, I’m a little bit surprised to be honest.”