If it weren’t for firefighters and army personnel, Eden would be all but empty.

The devastating bushfires which have wreaked havoc on so much of the NSW south coast almost seem to have singled out the coastal fishing, logging and tourist town.

Under threat since before Christmas, fires flared up to the west of the town again just a fortnight ago, and in truth, it would be difficult to imagine much more damage could be inflicted on the area.

Eden is a town built around logging and fishing where golf plays a secondary – though still important – role.

As pressure on the town’s main industries continues to increase reliance on tourism and its attractions – golf included – have become more important.

Eden Country Club is part of the larger club, the Eden Fishing and recreation Club, and both entities were already in difficult financial circumstances prior to the arrival of the fires in December.

The Country Club, though, has a potential saviour on the horizon in the form of a senior living development planned to be built on parts of the golf course site. 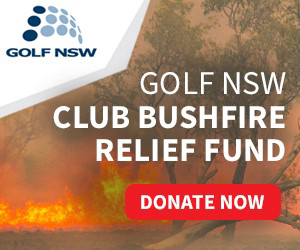 A DA seems likely to be approved for the project this month though there is less jubilation than might otherwise be expected in the wake of the blazes.

“The development is certainly a very significant step for us because it will perhaps finally secure our financial future and ensure our ability to continue to trade our bowls and golf activities,” says Andrew Terry, CEO of Eden Fishermen and Recreation Club.

“That question over the last two or three years has been a day to day proposition as to how long we could afford to maintain the two sites given the aging population and income that is reducing.

“But what impact that (the fires) will have on buying confidence (for the proposed development) for people to move to Eden and see that as a future area to retire is a concern to us.”

While the big questions about whether the development goes ahead remain crucial, they have been overtaken in recent weeks by the urgent requirement to react to the fire emergency.

Like many facilities along the coast, the Eden Fishermen’s Club found themselves in the unexpected role of evacuation centre on New Year’s Eve as people in their thousands fled approaching blazes.

“We first got the heads up late in the 29th when an SES worker walked in and told us to be prepared that they might be sending people here,” says Terry.

“We knew Mallacoota was on fire and residents were fleeing and that was the first wave that arrived later that night.

“By the 30th that had intensified and we started to get some other local farmers arriving. But to be honest we weren’t prepared for it, we didn’t have a check list of what to do.

While the drama was unfolding at the Fishermen’s Club, the Country Club was closed to focus on the immediate emergency.

In the days and weeks that followed, with demand for rounds low and the holiday population all but gone, a decision was taken to only open the golf clubhouse on select days.

It’s a devastating blow for a business that, like so many up and down the coast, relies heavily on this time of year for much of its income.

“January is probably 35 to 40% of our annual turnover,” says Terry. “A substantial amount of our yearly income is made in just one month.

“Eden is very, very seasonal. There is nothing here in winter, they (tourists) all go and it all comes in the holiday season.”

The presence of fire and army personnel on the streets of the town is confronting enough but Terry neatly puts the situation in context.

“They are the only people here,” he says. “That’s it. If they weren’t here, there would be no one here.

Not a single caravan.”

Recovery will be a long and difficult road for the entire NSW South Coast but in Eden it is not a guaranteed outcome for the local golf club.

Where the proposed senior living development had many feeling buoyant recently the mood now, as it is for so many, has switched to one of uncertainty.