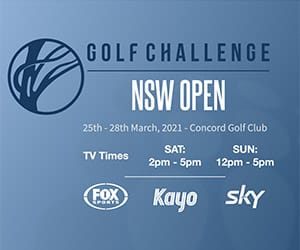 Jed’s the Best as Medal Decided in Playoff

Queensland’s Jed Morgan has added another title to his growing resume after winning a thrilling playoff for medallist honours at the NSW Amateur Championship.

After carding an opening four-under round, the 20-year-old followed it up with a grinding 71 in testing conditions at St.Michael’s Golf Club this afternoon.

The reigning Australian Amateur Champion’s two-round total of five-under was enough to finish alongside last week’s Australian Amateur medallist, Victorian Andre Lautee, who had earlier in the day added a two-under-par 70 to go with his open 69 at The Coast Golf club.

The playoff was a short-lived affair, however, with Morgan making a comfortable two-putt par on the 8th (the first playoff hole) to grab the medal.

Morgan was an extremely happy man after claiming a second trophy in a very hectic 72 hours.

“I was on a high yesterday, and had four under, and didn’t really care to be honest.

“But today, I woke up, and really wanted to win the strokeplay.

“I tried to lose it coming in but found my way again.”

Morgan was almost at a loss to describe the feeling of being in so much command over his golf in the last two weeks.

“I don’t know how it is falling my way at the moment, but I will keep taking it.

He admitted that he had begun last week’s Australian Amateur without any real expectations, but somehow the switch had been turned on.

“If you had asked me at the start of the Aussie Amateur last week, then this week, I would have said no chance. It is just so cool.”

“It’s been an unreal 54 hours or so and feels amazing. I feel so honoured, and I am pretty proud of myself.

“I’ve been waiting for a little while now. I’ve been doing the things my psychologist keeps telling me to do.

The final places in the 32 person matchplay field for the men were also decided in a playoff, with Michael Hanran-Smith, Jackson Bugdalski, Colin Mitchell, Harvey Byers, and Christopher Fan successful in the 11 person playoff.