Clubs across the State have rallied to the cause as the current bushfire crisis plays out across the eastern seaboard.

Several have become emergency staging and evacuation posts for communities up and down the coast as residents and holidaymakers sought shelter from the path of the giant fire fronts.

Bermagui Country Club was an evacuation point for hundreds of evacuees on New Year’s Eve as the giant Badga Forest Road fire bore down on the nearby village of Cobarbo. Although the evacuees were safe, the fire claimed seven lives, and destroyed the CBD of Cobarbo in the process.

Robert Beuzeville, General Manager of Bermagui Country club said the Club was probably the refuge point for some 2500 evacuees and firefighters during the ordeal.

“It all started at 5.30am on December 31. We opened the doors for the members and visitors for shelter and support.”

“I attended the Club for 48 hours straight before we shut down at midnight on January 1.”

The Club was commandeered as the RFS Command Headquarters on January 2. All local firefighters stayed onsite, and the Club provided meals daily & lunch packs for the crews for the seven days.

Mr Beuzeville said the Club’s focus was to create a sense of calmness and well-being throughout our community.

“All of our staff were either affected directly and indirectly, as the localities of Cobagro & Quaama are only a few kilometres away.”

Further north, Tura Beach Country Club became a temporary home to around four hundred evacuees at the height of the crisis last weekend. 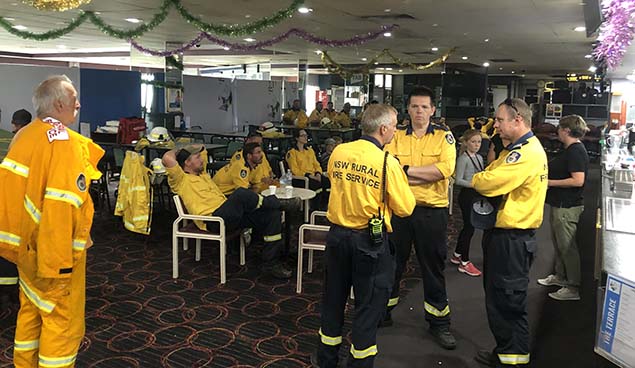 The NSW Golf Foundation is the charitable arm of Golf NSW and may be able to assist clubs who are facing hardship due to the impact of the bushfires.

Loraine Lambert, head professional at Tura Beach was one of those impacted by the fires and witnessed the havoc first-hand.

“I was one of them (an evacuee) myself,” she said. “Tura Beach was the only facility in the area that accepted pets, which ranged from dogs, cats, birds and bunny rabbits.”

“My business is impacted too because of this horrific situation we faced and continue to face.”

Ms Lambert was especially proud of the way the club handled the dramatic situation. Staff and kitchen caterers, led by the club’s general manager Don Field, manned the kitchen around the clock to ensure the evacuees were fed for the two days.

“The way we all came together to help the community is just a wondering thing and feeling.”

“I couldn’t be more proud of the Tura Beach management, staff and volunteers of this fantastic club I represent.”

Narooma Golf Club also became an evacuation centre, and several of its fairways became the holding point for tourists in cars and campervans stranded by the fires.

Mollymook Golf Club also opened its course as a holding place for tourists trapped by the closure of the Princes Highway.

With the fire jumping the Shoalhaven River and rapidly heading north, Kangaroo Valley Golf Resort was also forced to evacuate.

In response to the devastation, several individuals in the sport have raised their hand to assist.

Kemp, whose parents came within a whisker of losing their house to bushfires on the mid-north coast late last year, saw her efforts quickly matched by a number of other professionals locally and on the US PGA Tour at this week’s Sony Open.