It is double delight for the gun duo Harrison Crowe and Stephanie Kyriacou after picking up impressive wins in Japan and Queensland late last week.

Kyriacou was dominant all week, toppling the reigning NSW Junior Champion, Hye Park by two holes in the final of the Women’s Queensland Amateur at Gailes, while Crowe brought home the boys trophy the Asia Pacific Junior in Hakone, Japan.

Crowe arrived home from Tokyo all smiles and boasting the Boys Championship Trophy under his arm after an impressive, albeit soggy performance at the Asia-Pacific Junior Championship. Describing the weather as “very, very average,” Crowe carded a handy three-under-par to take out the boys single in the multiple format competition, with the Aussie team finishing fifth overall.

“The first round got cancelled, which was fourball, and then it was 36 holes on the second day; 18 of fourball and 18 of singles, then the foursomes got cancelled due to the weather being so bad,

“I won the singles, shot -3 in some really tough conditions,”

Courtesy of his win in the singles, Crowe has earned himself a start in the Asia Pacific Diamond Cup on the Japanese Tour in May next year. 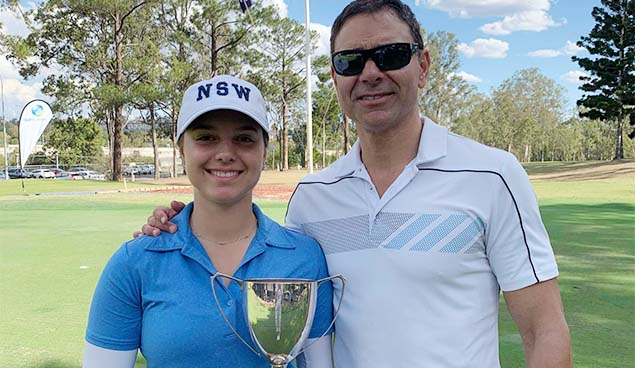 Kyriacou, who qualified for the knockout stage after finished third in the qualifying rounds, reached the final with wins against Steffanie Vogel (1 hole), Kerri Bong (2/1), and Brittany Hyland (2/1).

She showed her mettle quickly in Friday afternoon’s final, getting out to an early three-hole lead, and from there it was always going to be a tough ask for the younger Park to bounce back.

Park was unfazed, however, and a spectacular hole-out for eagle on the 7th, followed by another effective approach on the next, saw Kyriacou’s lead whittled to just one hole.

Park drew square with the Sydneysider after almost holing out on the 12th, but with the strain beginning to show, an errant tee-shot on the 15th proved to be pivotal.

Kyriacou seized the opportunity, taking the 15th. After a couple of solid pars to halve the 16th and 17th, followed by a spectacular second shot to the par-five 18th from the NSW star meant Park needed an eagle to keep the match alive.

Alas, The young Korean couldn’t force it into extra holes and a three-putt followed by a concession of Kyriacou’s birdie putt and a two-hole win to the St Michael’s tyro.

“It was a bit of stress.

“I started with a couple of mistakes, but I got some momentum going and made a few birdies … and was up most of the way, and got my confidence from there,” Kyriacou said.