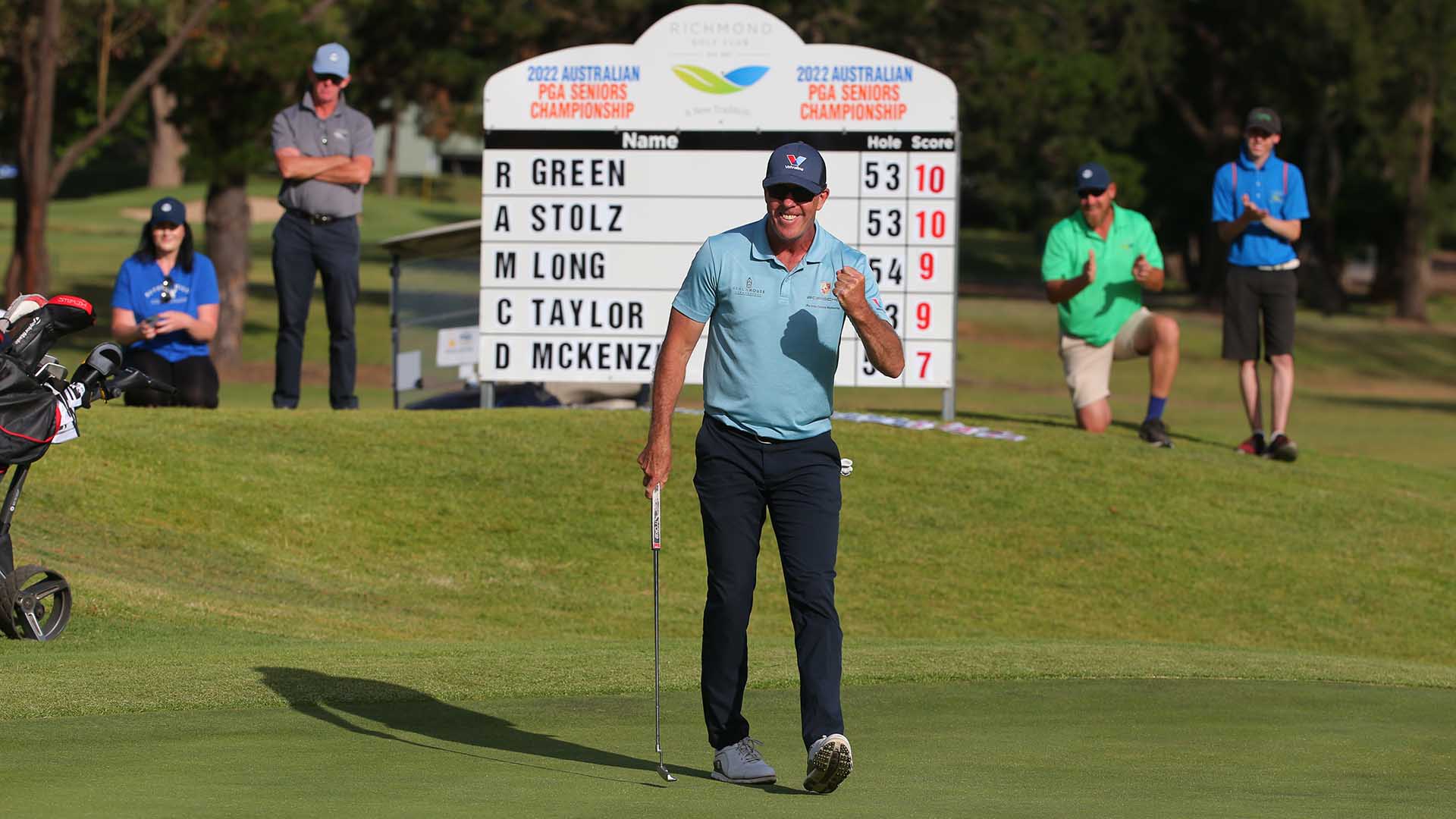 Richard Green has made it back-to-back titles on the SParms Legends Tour with a clutch birdie on the final hole in the Australian PGA Seniors Championship at Richmond golf club.

The 50-year-old Victorian, fresh from his victory in last week’s NSW Senior Open, looked likely to cruise to an easy win midway through the final round; however, a few closing hole hiccups and a surging Andre Stolz had other ideas.

Beginning the final round with a one-shot lead, Green jumped out of the blocks, birdieing the first to consolidate his lead.

Ominously for the rest of the field, it seemed to be a sign of things to come, with the three-time European Tour winner adding more red numbers to his card with birdies on the 4th, 6th, 7th and 8th holes to turn for home in just 31 strokes and out a commanding four shot lead.

Green added another on the 11th to get to 13 under par, but with the tournament looking like it was turning into a formality, the fun began.

Green dropped a shot on the 13th, then compounded it with another bogey on the 14th. With his playing partners, Stolz and Taylor Sniffing, a chance, the tournament was suddenly alive.

Michael Long, Playing four groups in front, was also on a tear and was the first player in the clubhouse at minus nine following an incredible final round six-under-par 64.

With the mark now set, it was up to the day’s final group to rise. Stolz made his move with birdies on 15 and 16 to get to within a shot of the lead.

When Green could only manage a bogey on the 17th after finding trouble in the trees, it was all square at the top with just the final hole to play.

As it has often done, the final hole at Richmond again proved pivotal. After the trio found the fairway from the tee, Stolz, first away, fired his approach to the short par-four long. Green then slung his wedge s pin high right and within about 10 feet, and again it was Advantage to the Victorian.

With the Green ringed in fans, Stolz, who again was away, could only look on as he rolled his putt form of the back edge agonisingly close. It didn’t budge from its’ line, however, ending up about four feet past.

With the destiny of the tournament now firmly back in his hands, Green made no mistake, slotting his birdie putt and, in a rare show of emotion, fist-pumping to the applause from the gallery.

“It tests you at all levels, doesn’t it, to be that far in front and stumble home,” A relieved Green said post-round.

“Ultimately it would have been nice to continue the way I was going on the back nine, but a couple of little self-inflicted errors I suppose that applied pressure down the closing holes.”

“I found it pretty difficult to gather myself and get it under control because things weren’t going my way.”

With his years of experience on tour, Green quickly acknowledged that it wasn’t the ideal way to win by losing such a significant lead, but it was a thrilling victory regardless.

“It’s nice to do it on the last, obviously.”

“(but) as soon as I started to have a bit of a look at things, (it) might’ve been the chance for some negativity to come in.”

.It’s just tough going, trying to win golf tournaments whether you’re miles in front or going down the stretch chasing.”

“It was not easy.

“You’ve got to gather yourself, gather your emotions and do your best on every shot.”

“That’s what I set out to do at the start of the day, start of the week, start oft his year, just to give everything on every shot. Fortunately that’s what got me there in the end.”

“I think to win the way I have this year is unbelievable.

“When I was on the main tours, they were coming every decade sort of thing, so to win four times this year is an incredible feeling.”