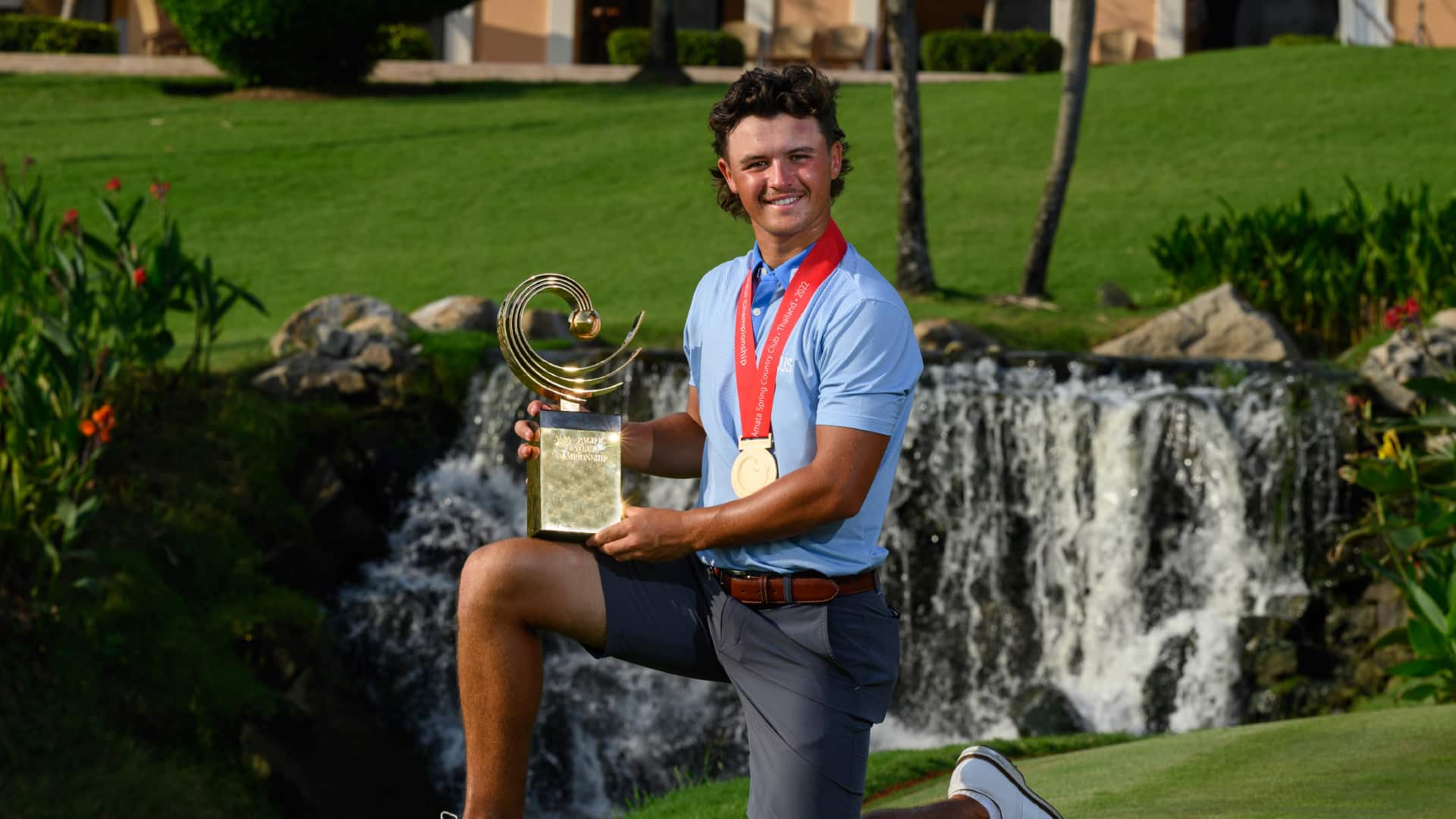 Sydney’s Harrison Crowe produced a back nine comeback on Sunday to claim Australia’s third Asia-Pacific Amateur title and book his ticket to the Masters and The Open in 2023.

Starting off with a wobbly bogey at the 1st hole that immediately negated his overnight two shot lead when playing partner Bo Jin birdied the same hole; Crowe lost two more shots to par over the front nine to sit at 10-under and three shots in arrears of the Chinese player.

Crowe’s comeback started at the par-5 11th where he began a hat-trick of birdies, but the moment for his “reset” came at the 10th.

“I had really had to dig deep,” Crowe said of his tough start. “I kind of just said to my dad and his mate ‘Dipper’ that I just need one, one to go in and one to drop.

And then from there I back myself to then keep it going. I hadn’t had a birdie all day then the one on 11, kind of momentum going really.”

The trio returned him to 13-under, but he still couldn’t keep track of Jin, who holed an approach on the short par-4 12th for eagle to reach 15-under.

Bogey at the 13th from Jin gave Crowe more of a sniff, one that got stronger when he birdied 15 that was followed with a bogey at the next hole, returning the deficit to one shot.

Then came the pivotal moment of the tournament at Amata Spring Country Club’s signature hole, the island green 17th.

Playing first, Jin found the water from the tee, while 21-year-old Crowe showed his ever-increasing maturity by playing a controlled iron to the middle of the green.

Two putts from each meant double bogey for Jin and par for Crowe. The latter taking a one-shot lead to the 72nd hole at 13-under.

The 18th at Amata Spring was not a hole Crowe found comfortable all week, but after a stellar drive he might have thought he had finally tamed the long par-4.

Yet the drama wasn’t over when he pulled his second shot that looked header for a watery grave.

“I did think it was going to go in the water,” Crowe said.

Fortunately, catching a lucky break and staying dry, the St. Michael’s Golf Club member hit a solid chip to set up a nervy four foot par chance to stay at 13-under and take the title as well as the spoils of a start at both the Masters and Open Championship next year after Jin made four.

Admitting to having never been as nervous in his life, and that his putter failed to keep still, Crowe rolled it in the centre and was surrounded by his Australian teammates.

“It means so much,” he said. “I came out here with something to prove and I am really proud of myself for the way I handled myself.”

Crowe will now delay what was an immediate decision to turn professional with his major berths and more now on his schedule.

“I thought I want a solid week and then onto the next chapter but this is how I want to delay things, for sure.”

The victor’s fellow New South Welshman Jeffrey Guan also had a nice day on Sunday, albeit not quite as sweet. Guan closing with a final round 69 to finish at nine-under and in a share of third.

“I didn’t start very well. The first nine holes, bit of a shocker to be honest,” Guan said. “I hit a lot of greens today and first couple of holes I just couldn’t get the ball going in the hole.

But was pretty patient and towards the back nine got some putts going in, which was good.”